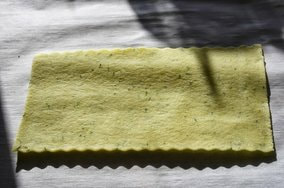 Directions for Fresh Dill Infused Pappardelle Pasta:
In a large bowl or the bowl of a food processor, mix together the flour.  Make a well in the center of the flour if not using a food processor, and add the eggs, olive oil, and dill if using.  Begin incorporating the flour into the eggs a little at a time, mixing  until a very loose messy dough forms.  If using a food processor, blend until a shaggy dough forms, and either case finish by kneading the dough by hand until a smooth dough forms.  Wrap the dough and allow to rest at room temperature for 1 hour.  Roll it out with a pasta machine, or by rolling pin, and then cut in to desired shapes 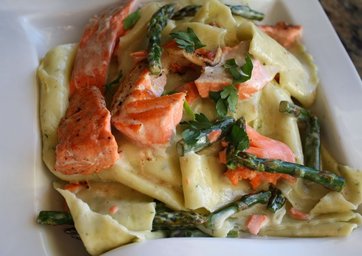 Bring a large pot of salted water to boil.  Cook the dried pasta based on the package directions.  If using the fresh pasta recipe below, cook for two minutes and drain well.

In a saute pan, heat two tablespoon dill olive oil over medium heat.  Add the sliced shallots and cook until tender.  Add the garlic and saute for another minute being careful not to burn the garlic.  Add the wine and lemon juice.  Continue cooking until the liquid is reduced by half.  Add the cream and the remaining dill olive oil.  Stir until the mixture simmers and thickens. Season with salt and pepper to taste.