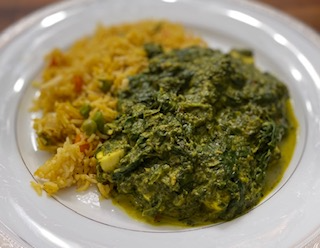 Place the whole block of paneer in a bowl of warm water to soften.

Combine 1/2 the bag of spinach, onion, tomatoes, garlic, ginger, jalapeños and water in a blender and blend til smooth.

Heat butter and oil in a large lidded skillet over medium high heat. Drop in cumin seeds and allow them to toast for 1 minute. Carefully pour in the blended ingredients, cooking and stirring until the excess liquid cooks off.

Add the rest of the bag of spinach to the pan, breaking it up so that it’s in a single layer. Season with salt, add 1/2 of the garam masala and the turmeric. Cover the pan and allow to cook approximately ten minutes more, stirring occasionally. You should not need to add additional liquid as the frozen spinach will release liquids as well, but you do not want it to stick to the bottom of the pan so pay attention to this. As the spinach cooks, remove the paneer from its bowl of water and chop into bite sized pieces.

At the end of ten minutes, uncover the pan, stir in the heavy cream and taste test. Depending on your tastes add the rest of the garam masala, more salt and stir. Now toss in the cubed paneer and allow it to heat through.
Garnish with julienned ginger and serve alongside basmati rice, naan bread or vegetable pulao.